New York State lawmakers on Wednesday agreed to extend sweeping protections against evictions into next year, moving to keep hundreds of thousands of people whose finances have been battered by the pandemic in their homes. Crystal Peoples-Stokes, center, the Assembly majority leader, speaks at a special session at the State Capitol on Wednesday.

The move was the first by a state to put in place new barriers to eviction after the U.S. Supreme Court last week rejected the Biden administration’s moratorium. It came as many parts of the country, including New York, have struggled to distribute tens of billions of dollars in pandemic rent relief that seeks to address renters’ unpaid bills.

After a separate Supreme Court ruling last month blocked a key piece of New York’s previous statewide moratorium, many tenant advocates had feared a wave of evictions was looming.

Sign up for The Morning newsletter from The New York Times

But the new agreement, which extends the moratorium through Jan. 15 and was passed by the State Legislature late Wednesday, now creates one of the most extensive protections in the nation. Only five other states and Washington, D.C., currently have eviction moratoriums in place, according to the White House, and many of those protections expire at some point this year. 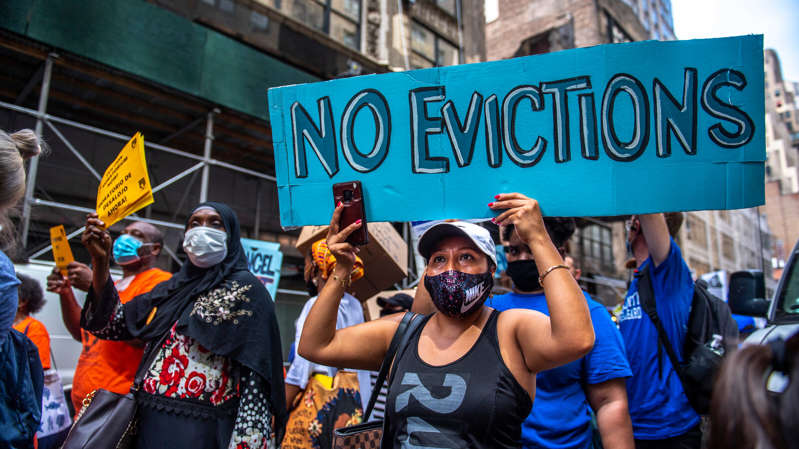 The New York Legislature was expected on Wednesday to extend sweeping protections against evictions.

“I think it’s huge for renters,” said Brendan Cheney, director of policy and communications for the New York Housing Conference, a nonprofit that advocates for affordable housing. He said it gives people “more time and more stability” to learn about how to access the rent relief program.

“If you look at the numbers, there are hundreds of thousands of people that seem to be behind on their rent due to the pandemic, owing billions of dollars in rent and it’s clear based on the program that very few of those people have gotten the money they need,” he said.

The move reflected how, even as vaccinations are helping revive many parts of the economy, the enormous amount of rent owed threatens to hobble the recovery, leaving large numbers of low-income residents facing debt or homelessness.

Ms. Hochul, a Democrat, brokered the deal to strengthen eviction protections with the Democratic leaders of the State Legislature, who often had an adversarial relationship with her predecessor.

In a move that underscored the situation’s urgency, Ms. Hochul called lawmakers back to Albany for an extraordinary session to extend the state moratorium, which expired on Tuesday. Democrats, who control the State Senate and Assembly, passed the measures on Wednesday over vociferous Republican opposition.

“In light of the Supreme Court ruling to strike down the federal eviction moratorium, the Senate majority is taking action to adjust and extend the state’s eviction moratorium to ensure that thousands of New Yorkers are protected from losing their homes and at the same time helping small landlords,” Andrea Stewart-Cousins, the Democratic majority leader in the State Senate, said in a statement earlier Wednesday.

On Aug. 12, the Supreme Court ruled in favor of a group of New York landlords, who said they did not have a way to challenge tenants who sought protection from eviction by submitting a so-called hardship claim, a form tenants can fill out saying they’ve experienced economic hardship because of the pandemic.

On Wednesday, lawmakers modified the moratorium to allow landlords to contest such claims in court. Property owners have argued that tenants could use the hardship claims to avoid paying rent even when they have the ability to do so.

The new measures will carve out other benefits for landlords, including the addition of “a nuisance standard” so property owners can commence eviction proceedings if a protected tenant is a nuisance or had heavily damaged a property. The moratorium extension will apply to residential and commercial evictions, as well as foreclosures.

Tenant groups and landlords, typically at odds, agree that extending the moratorium is a temporary solution that will only go so far if the state does not distribute $2.7 billion in rent relief that has mostly languished, leaving renters and landlords with troves of unpaid bills.

The money, which the state gives directly to landlords, is meant to prevent evictions by covering the unpaid bills of low-income renters, including up to 12 months of past rent, three months of future rent and utilities. But the program, which Mr. Cuomo launched over the summer, has been slow to distribute the money, in part because of technical difficulties, but also because many landlords and tenants were unaware of the aid.

As of Tuesday, more than $203 million — or about 7 percent of the money available — had been paid out for about 15,000 households, according to the Office of Temporary and Disability Assistance, which is running the rent relief program.

The program also shields tenants from eviction if their application for rent relief is pending. As of Aug. 23, the most recent data available, more than 176,000 applications had been received by the state.

Landlords and activists said Ms. Hochul, who has made fixing the program a top priority, should focus the state’s efforts on reaching every renter in debt and getting them to apply to the program before another moratorium expires again.

“It is a massive failure that 18 months into this emergency the state government has not even attempted to gather complete data on exactly how many New Yorkers are behind on their rent and how much debt they have accrued,” said Jay Martin, the executive director of the Community Housing Improvement Program, a landlord group.

Joseph Strasburg, president of the Rent Stabilization Association, which represents some 25,000 landlords of rent-stabilized units and had sued over the previous eviction moratorium, said the group would consider suing over the new moratorium, too. But how it responds will depend on how hard the law will make challenging tenants’ claims of hardship. Mr. Strasburg also said the state should be focused on paying landlords through the rent relief program.

“We don’t want to litigate this,” he said of the moratorium. “It’s a waste of money and it’s a waste of time when we should be focusing our energies on how to get the money out.”

Still, the agreement on a new moratorium was a major victory for tenant advocates. Cea Weaver, campaign coordinator for Housing Justice for All, said that Mr. Cuomo’s resignation and the two Supreme Court rulings represented a “perfect storm” for tenants in New York. But she called the agreement a “big win.”

“I hope it’s going to set the tone for the new administration,” she said.

Republican lawmakers, however, described the extension as the latest attempt by Democrats to vilify landlords and infringe on their property rights, arguing that tenants, whom some lawmakers described as lazy, were gaming the moratorium to avoid paying rent. Some predicted that Democrats would extend the moratorium again in January, because 2022 is an election year.

“I think we’re sending the wrong message to society by not, at the very least, providing stronger mechanisms to make sure those who can afford to pay rent and who are gaming this system should be held accountable,” said Assemblyman Michael Fitzpatrick, a Republican from Long Island. “It’s not fair. It’s not right. I don’t think it’s good politics at all.”

But with Democrats in control of both chambers, the extension prevailed by a vote of 38 to 19 in the Senate and 80 to 60 in the Assembly.

The sluggish pace of rent relief, and the Supreme Court’s ruling on the federal eviction moratorium, have placed new urgency on state and local officials to create a patchwork of their own policies across the nation, said Shamus Roller, executive director of the National Housing Law Project, which advocates for low-income tenants and has filed briefs defending moratoriums in several court cases.

Officials in Boston moved this week to ban evictions in the city in the aftermath of the ruling. Mr. Roller said that outside of New York, there was “no other state that I’m aware of that’s talking about taking such a significant leap.”

“I think we all hoped that rental assistance programs would be up and running, we all hoped that the pandemic would be functionally over at this point,” he said. “Neither of those things is true. I think lots of people are scrambling to hold all of this together, to keep us from ending up with a huge new problem around homelessness.”

APD | Pakistan committed to peace and service to humanity Sep 02,2021