Balkans feel abandoned as vaccinations kick off in Europe

When thousands of people across the European Union began rolling up their sleeves last month to get a coronavirus vaccination shot, one corner of the continent was left behind, feeling isolated and abandoned: the Balkans.

Balkan nations have struggled to get access to COVID-19 vaccines from multiple companies and programs, but most of the nations on Europe’s southeastern periphery are still waiting for their first vaccines to arrive, with no firm timeline for the start of their national inoculation drives.

What is already clear is that Albania, Bosnia, Kosovo, Montenegro, North Macedonia and Serbia — home to some 20 million people — will lag far behind the EU’s 27 nations and Britain in efforts to reach herd immunity by quickly vaccinating a large number of their people. 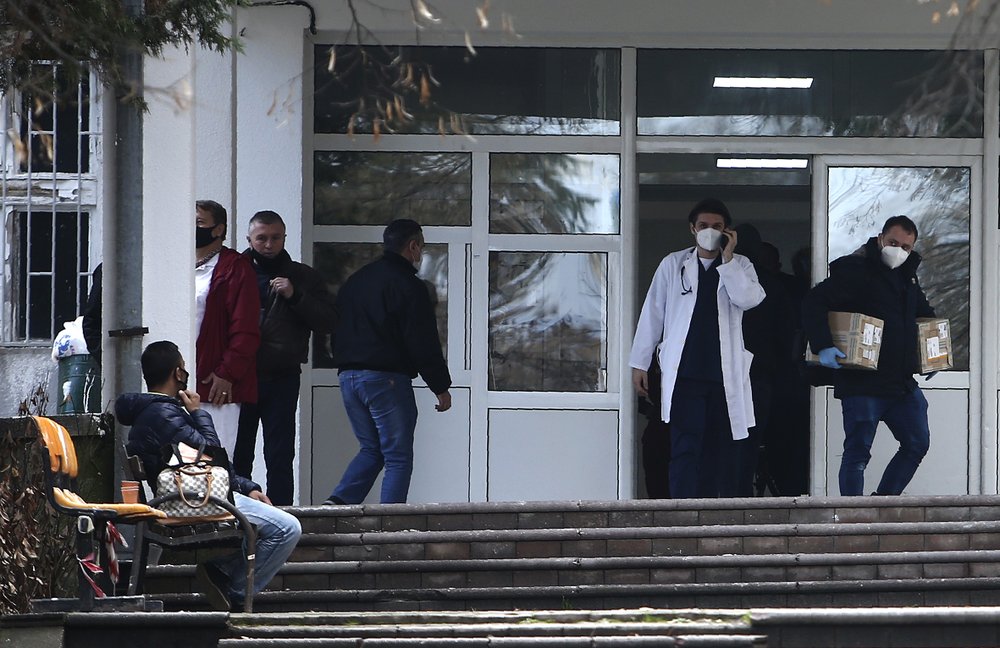 In this picture taken on Tuesday, Dec. 29, 2020, people and health workers are pictured in front of the entrance of the University Clinic complex in Skopje, North Macedonia. When thousands of people across the European Union simultaneously began rolling up their sleeves last month to get a coronavirus vaccination shot, one corner of the continent was left behind, feeling isolated and abandoned: the Balkans. (AP Photo/Boris Grdanoski)

North Macedonian epidemiologist Dragan Danilovski compared the current vaccine situation in the Western Balkans to the inequalities seen during the 1911 sinking of the Titanic.

“The rich have grabbed all the available lifeboats, leaving the less fortunate behind,” Danilovski told broadcaster TV 24.

Such sentiment as the world faces its gravest health crisis in a century has gained traction in the Western Balkans - a term used to identify the Balkan states which want to join but still are not part of the EU. It is actively being stoked by pro-Russian politicians in a region sandwiched between Western and Russian spheres of influence.

“I felt as if the bottom fell out of my hopes for a return to a normal life,” 50-year-old Belma Djonko said in Sarajevo, the Bosnian capital, describing the emotional fallout of hearing that thousands of doctors, nurses and the elderly across the EU had received the first doses of a vaccine developed by American drugmaker Pfizer and Germany’s BioNTech while her war-ravaged country is kept waiting.

Many Balkan nations are pinning their hopes on COVAX, a global vaccine procurement agency set up by the World Health Organization and global charity groups to address rising inequities of vaccine distribution. COVAX has secured deals for several promising COVID-19 vaccines but, for now, it will only cover doses to inoculate 20% of a country’s population.

Alongside other politically unstable post-communist Balkan nations that have long professed their desire to join the EU but keep failing to fulfil conditions to achieve that goal, Bosnia has reserved vaccines through COVAX and expects to start receiving its first doses in April at the earliest. 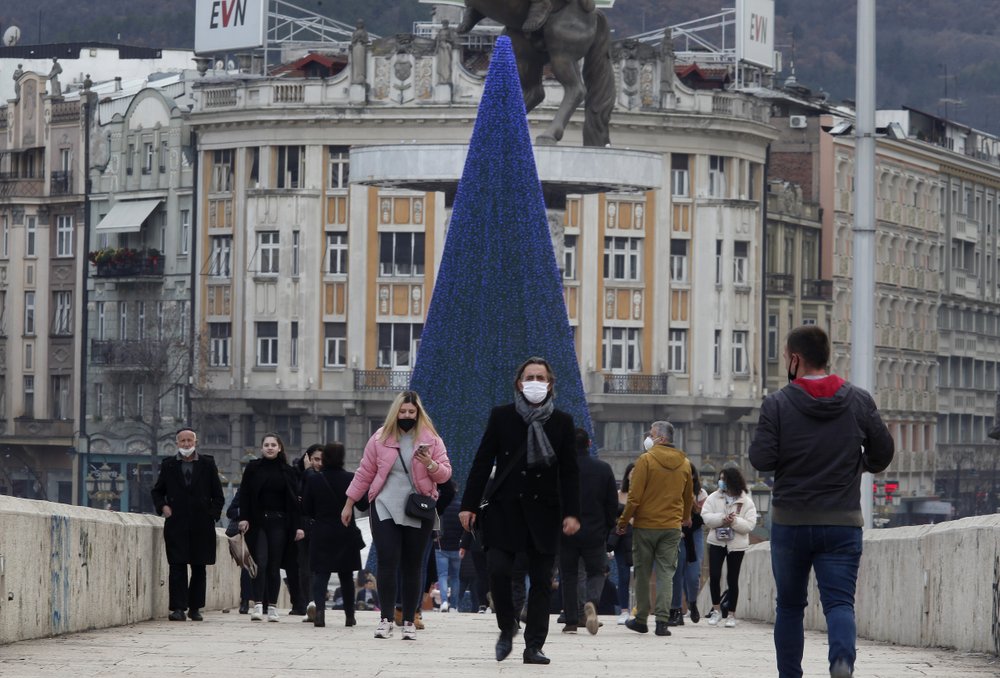 In this picture taken on Tuesday, Dec. 29, 2020, people wearing face masks walk across a bridge in downtown Skopje, North Macedonia. When thousands of people across the European Union simultaneously began rolling up their sleeves last month to get a coronavirus vaccination shot, one corner of the continent was left behind, feeling isolated and abandoned: the Balkans. (AP Photo/Boris Grdanoski)

“Meanwhile, I must continue depriving my 83-year-old father of the company and love of his grandchildren,” Djonko said, referring to the low-tech but heartbreaking defense against the virus, keeping the elderly isolated from potential sources of infection.

Serbia is the only Western Balkan nation to receive vaccine shots so far, getting deliveries from Pfizer-BioNTech and the Russian-developed Sputnik V vaccine. However, Serbia does not have enough doses to begin mass vaccinations, as only 25,000 shots of the Pfizer-BioNTech vaccine and 2,400 of the Russian vaccine have arrived.

Serbia’s vaccination program began on Dec. 24, three days before the EU, when Prime Minister Ana Brnabic received a dose in a bid to increase public trust in the vaccine, as many Balkan governments also struggle to counter a strong anti-vaccination movement.

The EU’s executive arm, the European Commission, recently agreed upon a 70 million-euro ($86 million) package to help Balkan nations get access to the vaccines, on top of 500 million euros ($616 million) the bloc has already contributed to COVAX.

“Throughout the pandemic, the EU has shown that we treat the Western Balkans as privileged partners,” said EU Enlargement Commissioner Oliver Varhelyi.

Ursula von der Leyen, head of the Executive Commission, says the EU will have more vaccines than necessary for its residents in 2021 and indicated the bloc could share its extra supplies with the Western Balkans and countries in Africa. 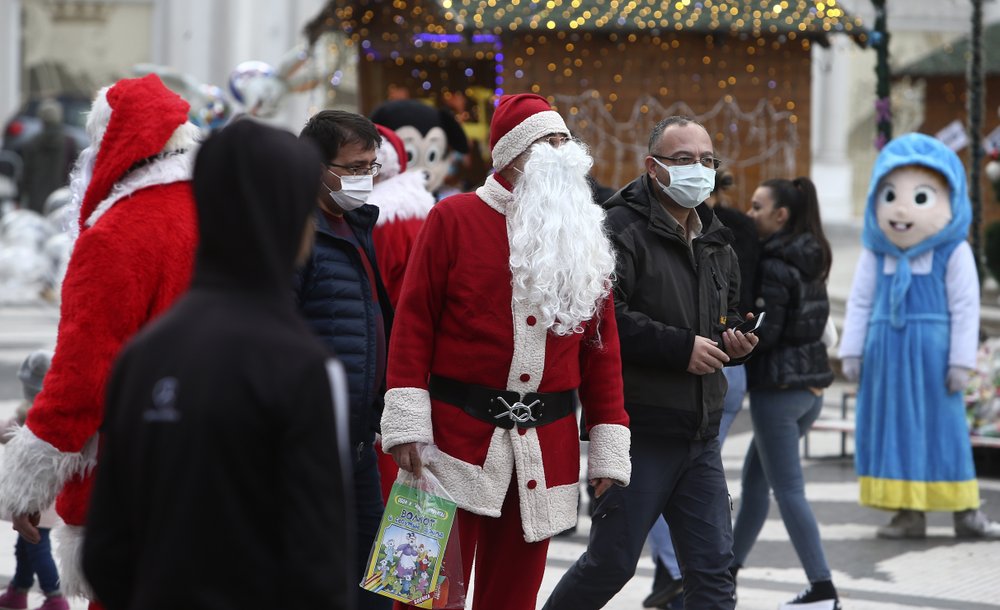 In this picture taken on Tuesday, Dec. 29, 2020, men dressed as Santa Claus hang around, as people wearing face masks walk through downtown Skopje, North Macedonia. When thousands of people across the European Union simultaneously began rolling up their sleeves last month to get a coronavirus vaccination shot, one corner of the continent was left behind, feeling isolated and abandoned: the Balkans. (AP Photo/Boris Grdanoski)

Yet in the Balkans, the dominant impression is that the bloc has once again failed the underdeveloped European region. In the words of Albanian political analyst Skender Minxhozi, the EU has reached its “put up or shut up” moment.

“Either show us that you care about us, or don’t be surprised if some of us follow the call of Russian or Chinese pied pipers who are traversing the world with pockets full of their vaccines,” Minxhozi said.

The apparent lack of Western solidarity amid the pandemic is being exploited by local pro-Russian politicians to portray the EU as solely profit-oriented. Russia and China, meanwhile, are vying for political and economic influence.

“I trust (the Russian vaccine), I don’t trust the commercial narratives that are coming from the West,” Milorad Dodik, Bosnian Serb’s leader, declared before he was hospitalized with coronavirus.

In the Albanian capital of Tirana, Prime Minister Edi Rama demanded an apology from the Russian embassy after it published a message on social media that Moscow stood ready to immediately supply Albania with the Sputnik V vaccine, although that shot is not certified in the EU.

“As a person I felt indignant and as a European I felt ashamed, while as Albania’s prime minister I felt more motivated than ever not to allow Albanians from being excluded from the possibility of being protected simultaneously with other Europeans,” Rama said while announcing a contract to buy 500,000 doses of the Pfizer-BioNTech vaccine.

Some believe the vaccination delay might prove to be a blessing in disguise in a region where years of declining trust in government and public institutions have amplified the voices of virus deniers and vaccine skeptics.

“I cannot wait for life to return to normal and for that to happen we need a successful vaccine,” said Belma Gazibara, an infectious disease specialist working in Sarajevo’s COVID-19 hospital.

Gazibara says watching the coronavirus vaccine rollout elsewhere in Europe will increase Bosnians’ desire to have the shots too.

“If, as I strongly hope, the approved vaccines keep their promise elsewhere in Europe, I expect the uptake to be much higher than it would have been right now,” she said.

APD | Pakistan committed to peace and service to humanity Jan 07,2021