European roundup: Juventus on brink of another title, Wolves march on 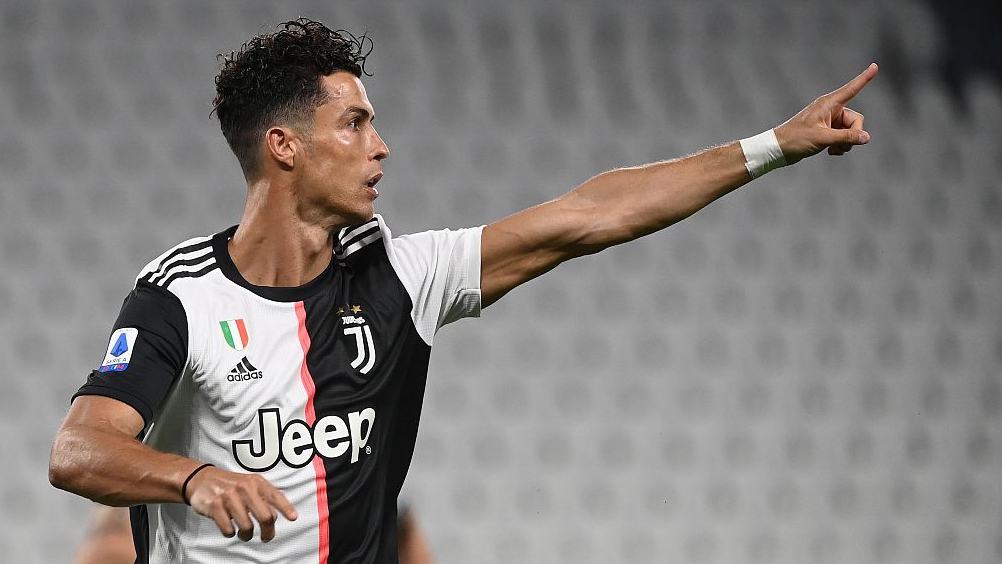 Juventus star Cristiano Ronaldo celebrates during their Serie A clash with Lazio at the Allianz Stadium, Turin, Italy, July 20, 2020. /VCG

Cristiano Ronaldo put Juventus on the brink of a ninth consecutive Serie A title on Monday after scoring twice in a 2-1 win over Lazio.

The reigning champions ended a three-match winless run thanks to Ronaldo's second half brace that moves them eight points clear of second-placed Inter Milan with four games remaining.

Maurizio Sarri's side could win the title on Thursday against lowly Udinese, or on Sunday at home against Sampdoria, depending on their rivals' results this week. Lazio's hopes of a first Serie A title since 2000 are effectively over as the defeat leaves them fourth, 11 points adrift of the leaders.

Ronaldo grabbed the first goal from the penalty spot just after the break and was handed a tap-in three minutes later by teammate Paulo Dybala.

The Portuguese has scored 30 goals this season, equal with Lazio's Ciro Immobile, who ended his three-match drought with a late penalty. His second was his 50th goal in Serie A.

The 35-year-old Portuguese is looking to become the first player to finish top scorer in three of the top five European leagues after doing so in England and Spain.

"Records are always important, but the team victory is more important," Ronaldo said to Sky Sports. "I'm helping the team to win. It's important to win the title. There are four games left and we know that Serie A is a difficult championship." Elsewhere, Wolves moved closer to a place in the Europa League with a 2-0 win over Crystal Palace, while Sheffield United's own European hopes were dashed by a 1-0 defeat against Everton.

Jonny condemned Palace to a seventh successive defeat in the 68th minute, turning to fire home from close-range after Adama Traore and Raul Jimenez carved open the Palace defense.

Nuno Espirito Santo's side climbed to sixth place, one point above Tottenham, and will be certain to qualify for the Europa League if they win at Chelsea in their last game of the season on Sunday. They would also qualify if Tottenham lose at Palace in their final match.

At Bramall Lane, Sheffield United were handed a second successive defeat, ending their bid to cap a superb first season back in the top-flight by earning a European berth.

Carlo Ancelotti's team won it in the 46th minute when Brazil forward Richarlison met Gylfi Sigurdsson's free-kick with a glancing header for his 15th goal of the season.

Chris Wilder's eighth placed side are five points behind Wolves and four points adrift of Tottenham with one game left.

In struggle to land a blow on Biden, Trump toys with nickname change Jul 21,2020