Manchester City opened up a commanding five-point lead at the top of the Premier League on Sunday as Ilkay Gundogan scored twice in a 4-1 victory at Liverpool, whose keeper, Alisson, endured an afternoon to forget.

An emphatic win, City's 10th in a row in the league and first at Anfield since 2003, moved Pep Guardiola's side to 50 points from 22 games, five more than second-placed Manchester United who have played a game more.

Champions Liverpool are now 10 points behind City in fourth spot, also having played a game more, and if further evidence were needed that they have gone off the rails it was the sight of Alisson, a rock for the past two seasons, effectively gifting City the points.

In the space of three second-half minutes he twice passed the ball straight to an opposing player, allowing first Gundogan to grab his second goal, after Mohamed Salah had leveled from the penalty spot, and then Raheem Sterling to make it 3-1.

The excellent Phil Foden capped a superb day for City with his side's fourth to leave Liverpool crestfallen.

Fourth-placed Liverpool are the first reigning top-flight champions to lose three successive home league games since Chelsea in 1956 and they are a massive 27 points worse off than at the same stage of last season.

City, who have won 14 straight games in all competitions, are now overwhelming favorites to claim a third title in four seasons.

"It's brilliant, every player wants to play in big games like this and we showed that courage from minute one," Foden said. "We definitely forced the errors. It's something we're working at in training." 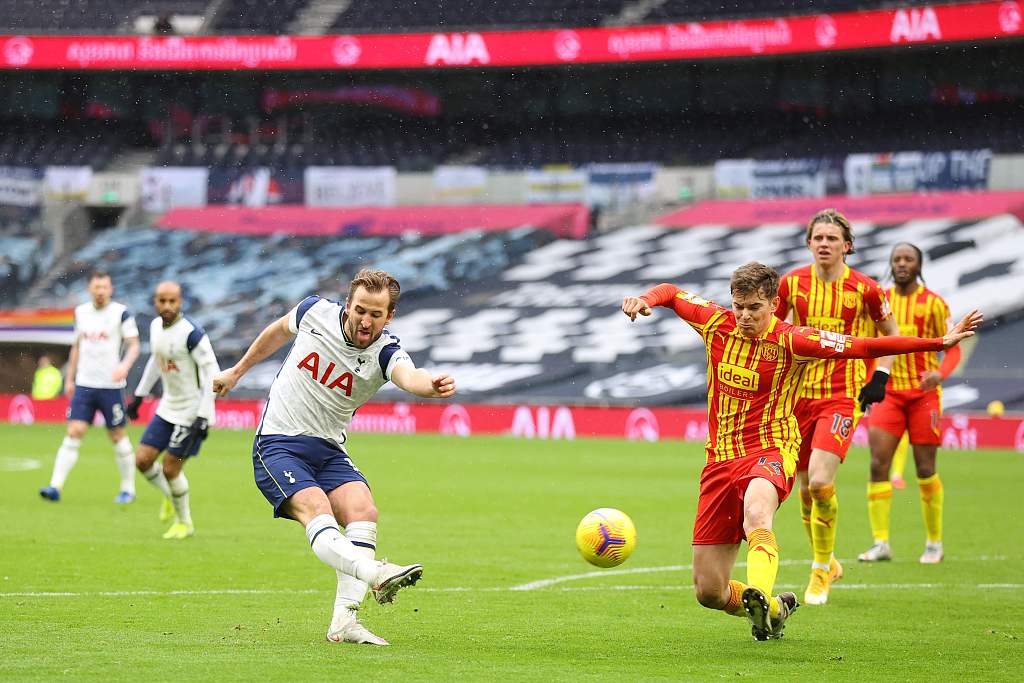 Harry Kane scored on his return from injury to help Tottenham Hotspur to a 2-0 victory over West Bromwich Albion on Sunday and end a three-match losing run in the Premier League.

The England skipper's return after missing the last two games with an ankle injury was sooner than expected and he was quickly back in the groove.

After missing a couple of chances in the first half Kane struck in the 54th minute to move joint second on Tottenham's all-time scoring list alongside Bobby Smith with 208 goals.

West Brom spent most of the time defending solidly but could have gone ahead on the stroke of halftime when Mbaye Diagne's header was kept out by Hugo Lloris while Diagne also had two goals rightly ruled out for offside.

Lionel Messi (L) of Barcelona is lifted by teammate Pedri Gonzalez after scoring the team's first goal against Real Betis during their La Liga match in Seville, Spain, February 7, 2021. /CFP

Lionel Messi came off the bench to inspire Barcelona to a 3-2 victory over Real Betis on Sunday, as Ronald Koeman's rotation gamble just about paid off.

Defeat would have called that decision into question but Messi drove in an equalizer two minutes after coming on in the second half and then helped set up Francisco Trincao to score a late winner and his first Barcelona goal.

Success also came at a cost as Barca's best available central defender Ronald Araujo was forced off with an ankle injury early on.