Beijing Guoan drew with Shanghai SIPG 1-1 and secured the third place 3-2 on aggregate in the Chinese Super League playoffs in Suzhou, east China's Jiangsu Province, on Wednesday, directly securing a ticket for the AFC Champions League next season.

Guoan clinched a 2-1 victory over SIPG in the first leg. Cedric Bakambu was absent from the second leg, after Guoan's top scorer left Suzhou to participate in a Congo national team fixture.

In the 30th minute, Alan Douglas finished ruthlessly with a low shot when presented with space in the box, as he controlled Zhang Yuning's pass before firing into the corner.

SIPG turned up the heat early in the second half when Ricardo Lopes pulled one back in the 47th minute.

The equalizer invigorated SIPG, but several golden chances to even the aggregate score were squandered, especially when a combination of the woodwork and goalkeeper Hou Sen kept out captain Hulk's powerful drive in the 58th minute.

In stoppage time, Hou Sen made a flying save to deny an impressive volley from Marko Arnautovic and helped secure a memorable victory for Guoan in the last game of the 2020 CSL season.

Meanwhile, Shijiazhuang Ever Bright was relegated from the Chinese Super League to League One when it lost 2-1 to Wuhan Zall in the second leg of their playoffs. 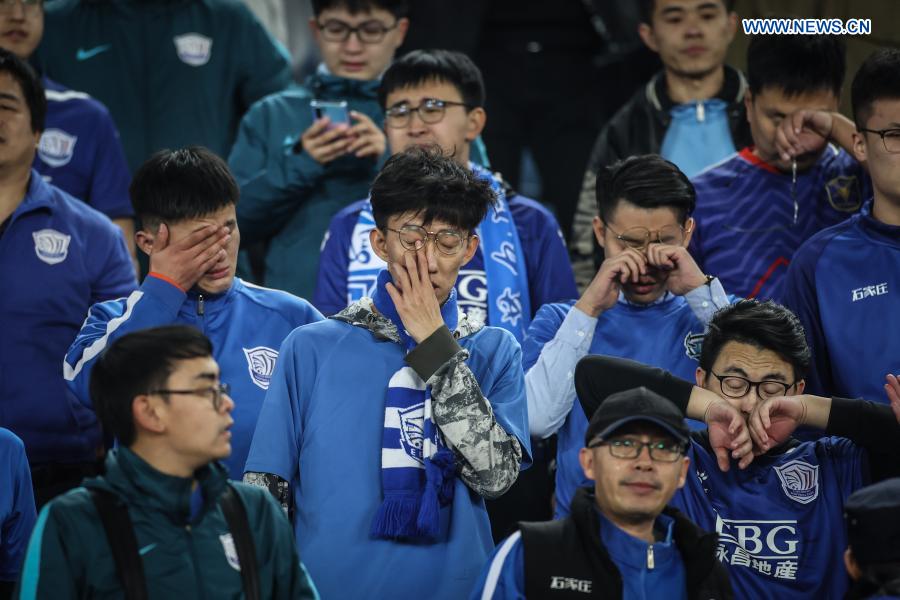 Supporters of Shijiazhuang Ever Bright react after the club is relegated from CSL in Dalian, northeast China's Liaoning Province, November 11, 2020. /Xinhua

Shijiazhuang, who drew with Wuhan 0-0 in their first leg, finished at the bottom of the coronavirus-affected season and was relegated.

Wuhan will vie with Zhejiang Greentown, the runner-up of the second-tier league, for a CSL spot next season in another two-legged playoffs, which will take place on November 18 and 22.

The title of the CSL 2020 campaign will be decided on Thursday when defending champion Guangzhou Evergrande takes on Jiangsu Suning in the second leg of their clash. Their first leg ended 0-0.