Real Madrid coach Zinedine Zidane must have feared the worst when Federico Valverde writhed in pain on the turf during their La Liga clash with Valencia on Sunday.

The Uruguayan midfielder, who has played a key role in Zidane's tactical setup this season, was substituted with 15 minutes to go, and the defending champions duly slumped to a 4-1 defeat and slipped to fourth in the league table.

It was a performance that Zidane admitted was "difficult to explain," but a much bigger blow was delivered about 24 hours after the chaotic contest at the Mestalla. Real Madrid confirmed on Monday that Valverde sustained a serious leg injury over the weekend and could be sidelined for a long period of time.

"Following tests carried out on our player, Federico Valverde, he has been diagnosed with a fracture in the posterior tibial bone in his right leg. His recovery will continue to be assessed," read a statement.

Valverde's absence will pose a further selection headache for Zidane, whose depleted team will visit Villarreal and Inter Milan after the international break. Last week, Eden Hazard and Casemiro were pulled out of the squad after testing positive for COVID-19.

Hazard had just scored in Real's 4-1 win over Huesca on October 31, while Casemiro has featured in all seven of Real's league fixtures so far this season, as well as their three Champions League games. Both had gone into self-isolation.

Real Madrid's archrivals Barcelona fared no better. The Catalan giants announced on Monday night that Ansu Fati, who ruptured the internal meniscus in his left knee during Barcelona's 5-2 home win over Real Betis on Saturday, will be sidelined for four months after undergoing knee surgery.

The 18-year-old talent had made an excellent start to the new season after establishing himself as a regular under new coach Ronald Koeman, scoring five goals and recording two assists in 10 matches across all competitions.

The injury means he will miss Barcelona's daunting trip to unbeaten Atletico Madrid later this month, the remainder of the Champions League group stages and the Spanish Super Cup.

The unusual late start to the new season, caused by the disrupted COVID-19 pandemic, has led to a grueling congested schedule. And the extra demands placed on players have made it more likely for them to get injured. 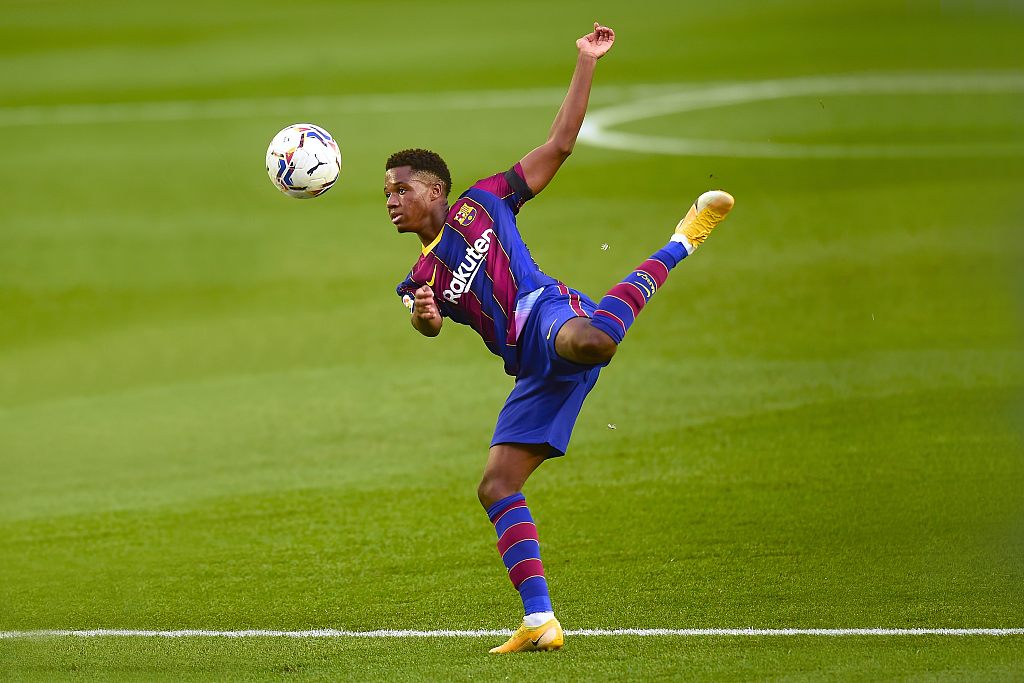 Ansu Fati is the youngest ever scorer in the Champions League and the youngest player to score for the Spain national team. /CFP

The concern over the fixture pileup has been publicly aired by Liverpool manager Jurgen Klopp and Manchester City Pep Guardiola. City striker Gabriel Jesus, who has just come back from injury, also issued a warning over the disregard for players' health.

"My physical condition is not the same and now I go to my international team and try to help my country and when I come back, I will try to come back in good physical condition," said Jesus, who is expected to fly to Brazil this week to play the World Cup qualifiers.

"That is the challenge for me, keep fit and don't get injured because this season is going to be dangerous for players because there are too many games," he added.