World number one Djokovic, the 2016 champion at Roland Garros, reached his fifth final in Paris, defeating fifth seed Tsitsipas 6-3, 6-2, 5-7, 4-6, 6-1 in a roller-coaster of a contest where he had held a match point in the third set.

On Sunday, Djokovic can win an 18th major and become the first man in half a century to win all four Slams twice.

Djokovic is one of only two men to have defeated Nadal at Roland Garros in 15 years. Sunday will be their 56th clash.

"This is the house of Rafa," said Djokovic. "I will have the motivation to win, I beat him here in 2015 but this will be the biggest challenge – playing Nadal on clay." 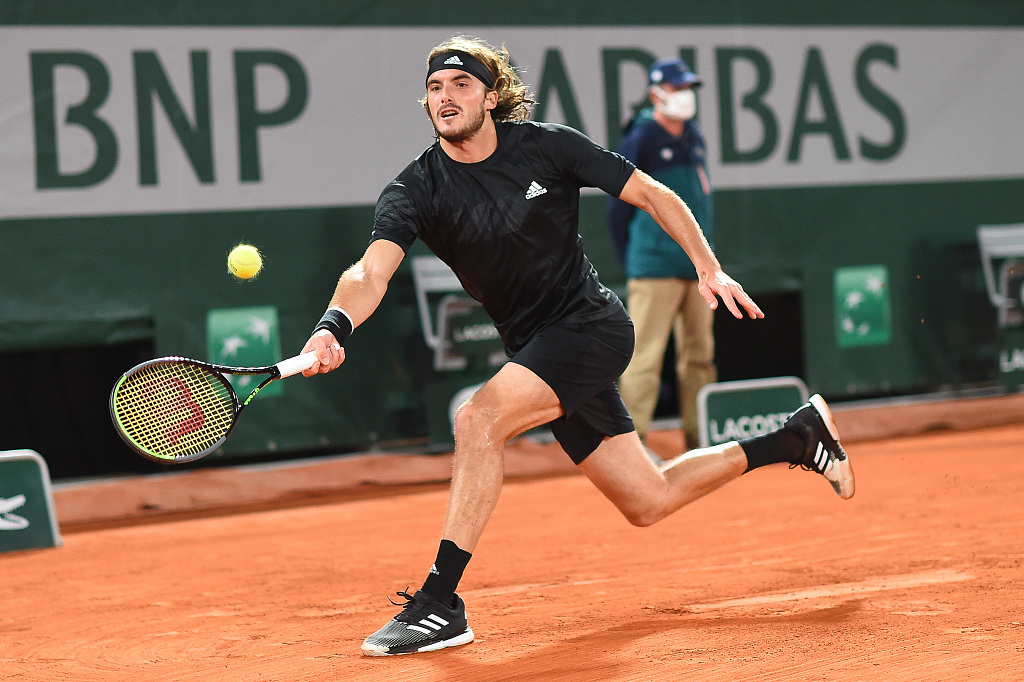 Stefanos Tsitsipas of Greece in action in his men's singles semi-final against Novak Djokovic of Serbia during the 2020 French Open at Roland Garros in Paris, France, October 9, 2020. /CFP

Djokovic hailed Tsitsipas, who was appearing in the semi-final of a Slam for only the second time.

"Stefanos is a big player but after four hours he was tired. He gave me a lot of trouble. I looked calm on the surface but it was a different story inside," added Djokovic who will be in his 27th Slam final.

Djokovic took a 5-1 career lead over Tsitsipas into the semi-final and showing no signs of the neck and shoulder injury which blighted his performance against Pablo Carreno Busta in the last eight, he secured the only break of the opener in the second game.

Crucially, he saved all five break points he faced.

That became seven from seven early in the second set and he made Tsitsipas pay, breaking for a 3-2 edge and backing it up with another for 5-2.

An eighth break point came and went in the second game of the third set with Djokovic breaking for 5-4.

Having saved two more break points, Djokovic was unable to convert a match point in the 10th game, picked up a time violation and, unsettled by the call as well as disturbances in the crowd, was broken at the 11th time of asking.

From the brink of a quick exit, Tsitsipas stayed alive, taking the third set 7-5.

Djokovic squandered 10 break points in the fourth set as Tsitsipas, who had also been two sets down in his opening match against Jaume Munar, levelled the match.

However, in a final twist and as the clock ticked closer to the four-hour mark, Tsitsipas faded away in the decider, dropping serve twice to hand Djokovic a 4-1 lead.

He saved another match point but was powerless on the third as Djokovic fired a clean winner.

For 34-year-old Nadal, his win over Schwartzman was his 99th at Roland Garros.

He is into his 28th final at the majors and has not dropped a set in the tournament this year.

"It's always incredible to play here and this is a very special moment," said Nadal after a 10th win in 11 matches against Schwartzman who had shocked him in Rome last month.

"I played a couple of bad points in the third set but Diego is a very tough player. He probably makes more breaks on the tour than others."

"It's different playing against Djokovic, Federer, Rafa, these guys. Is not easy playing them five sets because you have to play your best tennis maybe for three, four hours, five hours. Physically it's very hard," he admitted.

Strangers save children trapped inside SUV during flood in China Oct 10,2020