NASA plans to launch two new scientific missions to Venus between 2028 and 2030 for the first time in over 30 years.

The US space agency said the missions aim to further the understanding of the planet's atmosphere and geologic features.

NASA said it was awarding $500m (£352m) for the development of each of the two missions, named DAVINCI+ and VERITAS.

DAVINCI+ will measure the composition of the dense Venusian Atmosphere and will explore how it evolved. 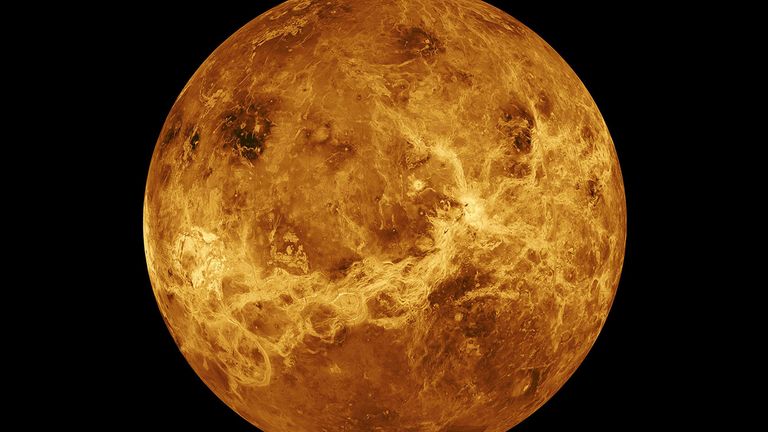 Image: Venus has a toxic, heavy atmosphere made up almost entirely of carbon dioxide with clouds of sulphuric acid. Pic: NASA

Meanwhile, VERITAS will map the planet's surface from orbit to help determine its geological history and why it developed so differently than Earth.

DAVINCI+ consists of a fly-by spacecraft and an atmospheric descent probe, and is also expected to return the first high-resolution images of unique geological characteristics on Venus called "tesserae."

Scientists believe those features may be comparable to Earth's continents and suggest Venus has plate tectonics.

Announcing the missions, NASA administrator Bill Nelson said: "These two sister missions both aim to understand how Venus became an inferno-like world capable of melting lead at the surface.

"They will offer the entire science community the chance to investigate a planet we haven't been to in more than 30 years."

He added: "We hope these missions will further our understanding of how Earth evolved and why it's currently habitable when others in our solar system are not."

The orbit of Venus brings it closer to Earth than any other planet. It is the second planet from the sun, and is similar in structure to Earth but slightly smaller in size, with a diameter of around 7,500 miles (12,000km).

It has a thick, toxic atmosphere consisting primarily of carbon dioxide, with clouds of sulfuric acid droplets - resulting in a greenhouse effect that bakes the planet's surface at temperatures as high as 471C (880F).

Thomas Zurbuchen, NASA's associated administrator for science, said: "We're revving up our planetary science programme with intense exploration of a world that NASA hasn't visited in over 30 years."

In 1990, NASA's Magellan spacecraft reached Earth's sister planet and made the first global map of the Venusian surface as well as global maps of the planet's gravity field.

The Magellan spacecraft was later sent in 1994 to plunge into the planet's surface to gather data on its atmosphere before it ceased operations.

Whoever takes HK as a tool to curb China is HK's real enemy: Official Jun 03,2021

The One Big Question About Trump’s DoJ Spying on Dems Jun 03,2021