UN Secretary-General Antonio Guterres on Thursday welcomed an agreement between Israel and the United Arab Emirates (UAE), under which Israel will suspend its plans to annex parts of the occupied West Bank, said his spokesman on Thursday.

"The secretary-general welcomes this agreement, hoping it will create an opportunity for Israeli and Palestinian leaders to re-engage in meaningful negotiations that will realize a two-state solution in line with relevant UN resolutions, international law and bilateral agreements," it said. 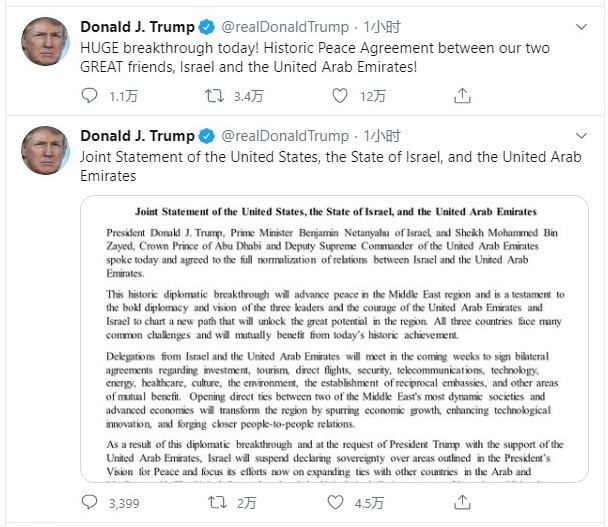 A screenshot of U.S. President Donald Trump's Twitter account shows he tweeted on Aug. 13, 2020 "Historic Peace agreement between our two GREAT friends, Israel and the United Arab Emirates!" together with the joint statement of the United States, Israel and the UAE. (Xinhua)

Annexation would effectively close the door for a renewal of negotiations and destroy the prospect of a viable Palestinian state and the two-state solution, it noted.

Peace in the Middle East is more important than ever as the region confronts the grave threats of COVID-19 and radicalization. The secretary-general will continue to work with all sides to open further possibilities for dialogue, peace and stability, said the statement.

Trump and Netanyahu announced separately on Thursday that Israel and the UAE have agreed to establish diplomatic ties. The agreement is in return for Israel's suspension of its annexation plans indefinitely.

The agreement would make the UAE the first Gulf state to normalize relations with Israel.

Italian designer Cucinelli gives $38m of clothing to those in need Aug 14,2020