This year marks the 75th anniversary of the founding of the United Nations. For more on the UN's role in global economic and social development, CGTN's reporter Su Yuting speaks to Sha Zukang, the former under-secretary-general of the world body.

When discussing the UN's biggest achievements in promoting global economic and social development with CGTN's reporter, Sha said he would agree with the UN secretariat list of 11 but would pick his top three – fighting poverty and providing vaccines, and help coordinate global action on climate change.

"Global poverty rates have been cut by more than half over the last few decades, with significant progress in East and Southeast Asia. China has seen the most dramatic achievement, lifting over 700 million people out of poverty. The UN has played an important role in catalyzing global cooperation in fighting poverty." he continued.

The UN has been coordinating global partnerships to combat pandemics and is now leading the global response to fight COVID-19. The UN family is also at the forefront of the effort to save our planet, he added.

When he was asked about the process, the UN Millennium Development Goals (MDGs) coming into being and MDGs' impact.

He replied that "MDGs have produced the most successful anti-poverty movement in history and served as the springboard for the sustainable development goals (SDGs). The number of people now living in extreme poverty has declined by more than half, falling from 1.9 billion in 1990 to 836 million in 2015."

He also emphasized that he is very proud to point out that China's success was a large part of that story.

The United Nations Millennium Declaration, signed in September 2000, commits world leaders to combat poverty, hunger, disease, illiteracy, environmental degradation, and discrimination against women. The MDGs are derived from this Declaration, and all have specific targets and indicators.

At the end of the interview, he mentioned the UN's necessity, saying that the world needs the UN because it has helped prevent disputes from escalating into war; it has established an international legal system through treaties.

Without these legal and normative frameworks, the 75 years of peace, security, and development would not have been possible." he further explained. 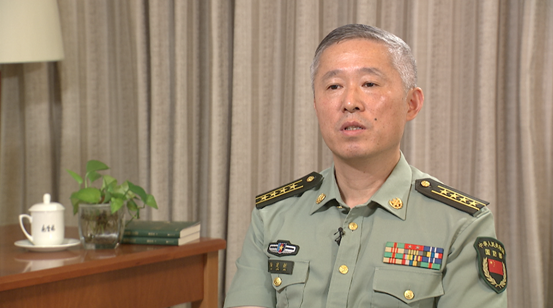 A look at China's role in UN peacekeeping operations

Peacekeeping missions are a United Nations' innovation in response to armed conflicts around the world. Since the first UN mission was deployed in 1948, the global body has conducted more than seventy peacekeeping operations worldwide.

Since April 1990, when five military observers were deployed to the UN's peacekeeping mission in the Middle East, the Chinese military has contributed over 40-thousand servicemen and women… to twenty-five missions around the world.

Senior Colonel Lu Jianxin, professor of the College of International Studies from the National University of Defense Technology, and Senior Instructor of the Peacekeeping Affairs Centre of the Chinese Ministry of National Defense said: "Chinese peacekeepers, along with peacekeepers from other countries, are often mandated to supervise ceasefire agreements, stabilize the usually volatile situation in mission areas and protect the human rights and physical security of local civilians in host countries. They also provide force protection and other operational support to fellow peacekeepers."

From the Democratic Republic of the Congo to Mali to Darfur, Sudan, and beyond, Chinese peacekeepers have brought into full play the fine tradition of loving and caring for the people.

For years, China has grown into the largest peacekeeping personnel source among the permanent members of the UN Security Council. China is also the second-largest financial contributor to the UN peacekeeping budget.