Some 36 looks in the latest collection embodied Wang's signature note of sophisticated minimalism and sent out a clear message: women can be feminine and powerful at the same time.

By using colors such as dawn grey and various shades of cafe au lait, Wang sought to reinvent the scene where a woman sit at an outdoor cafe at dawn in Paris, taking time to drink a cup of coffee before diving right into work.

I enjoyed doing so every time I went on a business trip to Paris, said Wang, adding that professional women should also be able to stop and smell the flowers.

Apart from her usual use of cashmere and wool for the outwear, the designer used silk for blouses in order to add a touch of briskness. The carefully chosen materials embodied the Taoray Wang's spirit, that is women could be soft outside and strong inside.

It was the 12th time that Wang brought her namesake brand Taoray Wang to the fashion week, and also the most difficult one. The designer's team in Shanghai, China, could not come to the fashion week because the United States banned the entry of all foreigners who have traveled to China in the past 14 days. 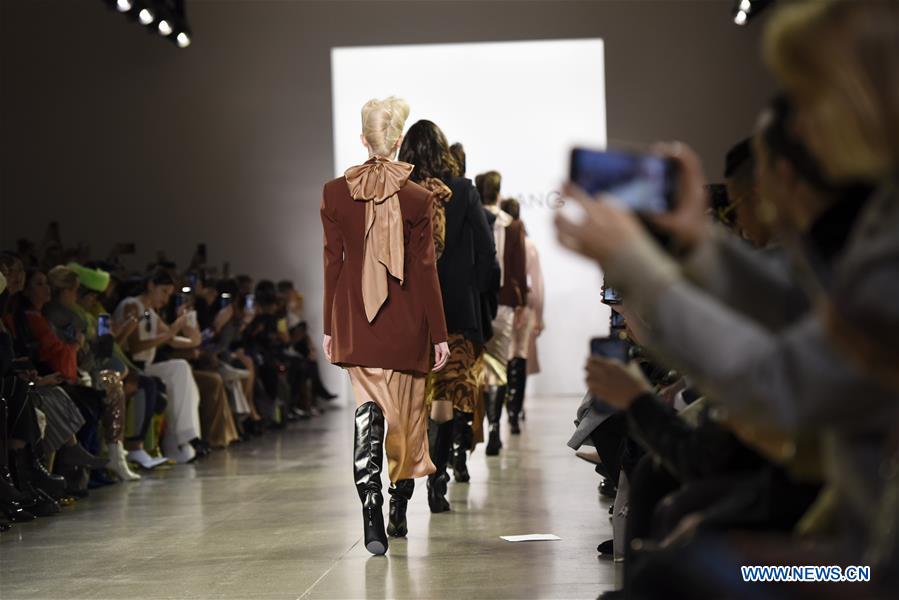 Wang went through great difficulties in assembling a temporary team to prepare for the runway show and transporting clothes and accessories from Shanghai to New York city.

She said she's honored to be one of the few representatives of China's fashion industry that still manage to release new collection in a professional way at New York Fashion Week.

I want to show the world that we Chinese always keep our promises and will never give up, Wang told Xinhua on the sidelines of the runway show.

At a time when China is fighting against the novel coronavirus break, the designer said people from different industries are all making a contribution as much as they can in their own ways.

Together face challenges and overcome difficulties. The dawn is here, he said.

Many of Wang's clients applauded her for making it happen.

She empowers women through her designs, and tells people to stay positive and strong in this difficult time by presenting an amazing show, said Amy Zhang, a long-time client of Taoray Wang.

You can do anything that you set your mind to. And she proves that said Zhang, executive vice president and portfolio manager of Fred Alger Management.

Wang, a graduate of East China Normal University in Shanghai, has grown from an aspiring designer to one of Asia's most successful female entrepreneurs. Since her brand made its debut in the fall of 2014, she has become a regular at the New York Fashion Week.

Held in February and September, the semi-annual event is one of the four major fashion weeks in the world, collectively known as the Big Four, along with the Paris, London and Milan fashion weeks.