Nepal's last known dancing bear has finally found a home in neighbouring India, to the relief of animal activists who feared for his safety after the death of his buddy.

Rangila, a 19-year-old bear rescued from captivity, made the 30-hour journey from Nepal to a sanctuary in Agra, officials from Indian animal charity Wildlife SOS said Wednesday.

"He reached us late yesterday and we are caring for him and feeding him. He loves honey," said Kartick Satyanarayan from Wildlife SOS, which runs the Agra Bear Rescue Facility in northern India.

"After a quarantine period we will begin his socialisation and rehabilitation process."

Rangila was one of two sloth bears rescued in southern Nepal in December from a pair of itinerant street performers who used the animals for entertainment.

The pair were transferred to a zoo but the female died just weeks later from what animal activists described as "negligence".

Last month, Nepal's government allowed the surviving bear to be transferred after intense lobbying from the Jane Goodall Institute and the World Animal Protection group.

"It is a huge relief that Rangila will now live the life he deserves, free from harm and with all of the proper care he needs," Neil D’Cruze, senior wildlife advisor at World Animal Protection, said in a statement. 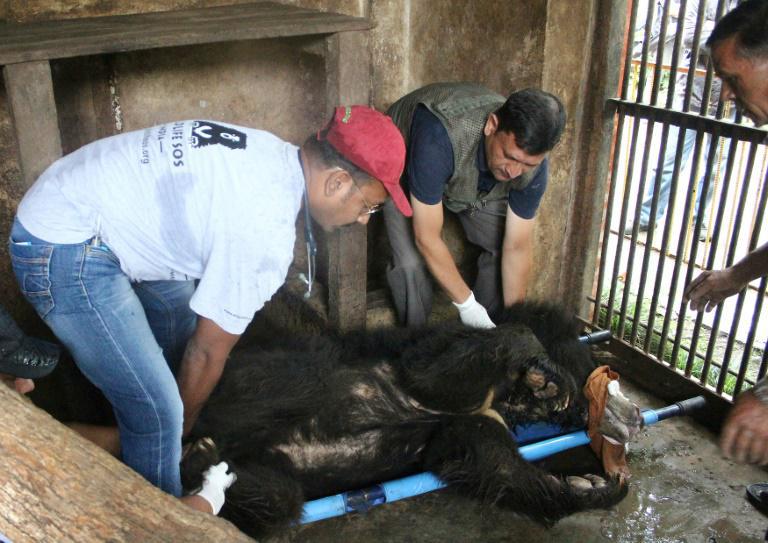 Wildlife officials prepare to transport Rangila, Nepal's last known dancing bear, from Kathmandu to an animal ambulance for the journey to India

Nepal outlawed the practice of performing bears back in 1973, a year after it was officially banned in India. But the tradition lingered in parts of Nepal's south.

Dancing bears are trained as cubs to dance on their hind legs. Their snouts are pierced with a heated rod so they can be controlled by the tug of a rope or chain.

They date back on the Indian subcontinent to the 13th century when trainers, belonging to the Muslim Qalandar tribe, enjoyed royal patronage and performed before the rich and powerful.

Shrinking habitats and rampant poaching have reduced their numbers, according to the International Union for Conservation of Nature. They can grow up to 1.8 metres (six feet) tall and weigh up to 140 kilos (310 pounds).

APD | Pakistan committed to peace and service to humanity Jul 13,2018