Premier Li Keqiang laid out a roadmap for China to overcome the obstacles set by the COVID-19 pandemic on Friday, when delivering a government work report which contained no specific economic growth targets for 2020 but included a raft of measures to support businesses and employment.

Addressing the opening meeting of the third session of the 13th National People's Congress in Beijing, Li said the country's future remains bright but cautioned that "for some time to come, China will face challenges like never before."

In a session which began with attendees observing a moment of silence in memory of those who have lost their lives in the pandemic, the premier committed to global cooperation in the face of COVID-19, said new measures would be put in place to safeguard national security in Hong Kong and Macao special administrative regions, and work to implement the phase one China-U.S. trade deal would continue. 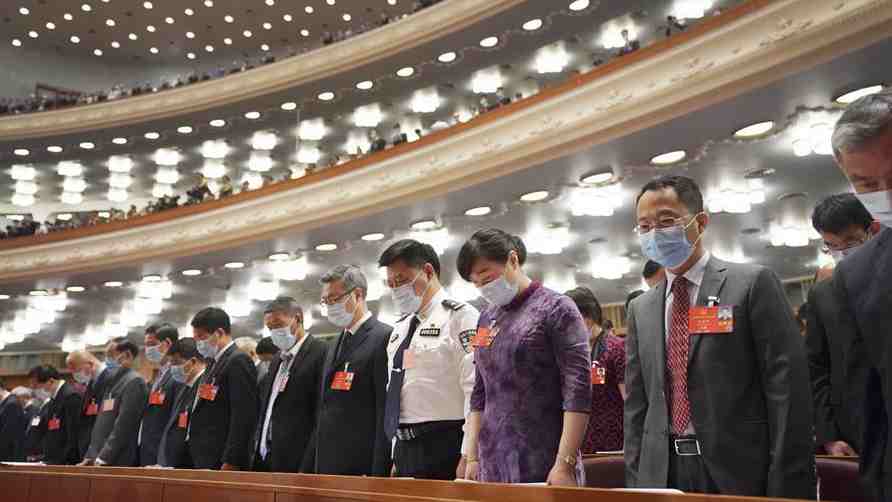 Attendees pay a silent tribute to those who lost their lives in the fight against COVID-19 during the opening meeting of the third session of the 13th National People's Congress in Beijing, China, May 22, 2020. /Xinhua

"Let us meet our challenges head-on, move determinedly forward in the fight against COVID-19 and in pursuit of economic and social development," Li said, "and strive to fulfill the main targets and tasks for this year."

Li announced the government would not be setting specific growth targets in 2020 for the Chinese economy, which expanded by 6.1 percent last year because China "will face some factors that are difficult to predict in its development due to the great uncertainty regarding the COVID-19 pandemic and the world economic and trade environment."

The premier praised the Chinese people for building a "Great Wall of solidarity against the epidemic" but said the country's "success has come at a great price." The economy contracted 6.8 percent in the first quarter of 2020 from a year earlier.

"The country posted negative growth in the first quarter of this year and daily life and work have been greatly affected. However, life is invaluable. This is a price we must pay and a price worth paying."

Li said China remained committed to opening its doors to the outside world in a complex international environment and would continue to work with the United States to implement the first phase of the economic and trade agreement between the two countries.

The premier added that efforts to complete the Regional Comprehensive Economic Partnership would continue and free trade negotiations with Japan, South Korea and other countries would be advanced.

He also said the negative list for foreign investment will be "significantly shortened" and some new measures would be implemented to help ease and raise capacity of international trade.

Li confirmed "sound legal systems and enforcement mechanisms for safeguarding national security" would be established in the Hong Kong and Macao special administrative regions and stressed that the "One Country, Two Systems" policy would be "fully and faithfully" implemented.

A draft decision on establishing and improving the legal system and enforcement mechanisms for HKSAR has been submitted to China's national legislature for deliberation.

The premier added that the government will "resolutely oppose and deter any separatist activities seeking 'Taiwan independence'," and pledged to continue to take measures to encourage cross-Straits exchanges and cooperation.

He said compatriots in Taiwan would be encouraged to "join us in opposing 'Taiwan independence' and promoting China's reunification."

Li emphasized the government would do its utmost to support enterprises, stressing that micro, small and medium businesses were in particular need of support in the context of the pandemic.

The premier announced that exemptions introduced earlier this year to help businesses through the pandemic, due to expire by June, would be extended to the end of the year and said further cuts to taxes and fees of around 500 billion yuan would be made.

Li also stressed that regulations should be tightened to "prevent funds circulating in the financial sector for the sake of arbitrage."

Li announced a consumer price index target of 3.5 percent for 2020 and a deficit target of 3.6 percent of GDP, up from 2.8 percent last year, suggesting room to maneuver in the pursuit of strengthened economic growth.

The two trillion yuan will be transferred directly to local governments and used to support jobs, businesses and basic living requirements, including "giving support to cut taxes and fees, reduce rents and interest on loans, and increase consumption and investment" An urban unemployment rate target of around six percent has been set for 2020.

The premier also warned that governments at all levels needed to tighten their belts and committed to the central government for a negative growth in budgetary spending this year.

Li said that as well as continuing to promote consumption, the main driver for economic growth in 2019, 3.75 trillion yuan of special local government bonds would be issued with priority given to new infrastructure and new urbanization projects.

He added that investment would be focused on three areas: New infrastructure, including expanded 5G application and wider use of new energy vehicles; renovation of 39,000 old urban residential communities; and development of major transportation and water conservancy projects.

Li thanked people from all walks of life for their support in the fight against COVID-19, highlighting the roles of medical workers, scientists, community workers, officials, police officers, deliverymen and women, media personnel and volunteers.

He outlined the containment measures adopted by China, including treating COVID-19 as a Class A infectious disease and activating a Level One public health emergency response in all localities, but warned the pandemic has not yet come to an end and the country faces immense tasks in promoting development.

The premier set out measures to improve the public health system, including the reform of the system for disease prevention and control, improvement of mechanisms for direct reporting and early warning of infectious diseases.

He also committed to increase funding for research and development of vaccines, medicines and rapid testing technologies.

China remains committed to fulfilling targets to build a moderately prosperous society in all respects despite the fallout from the COVID-19 pandemic, Li reiterated.

American cruise passengers quarantined at US military bases May 22,2020

Veneto governor: Venice Film Festival to go ahead in September May 22,2020

China beefs up crackdown on environment-related crimes May 22,2020

APD | Role of Pakistani students in China lauded May 22,2020