China-EU partnership on trade is rooted in stability

Last year, China overtook the U.S. as the EU's largest trade partner, with trade reaching 586 billion euros ($711 billion), compared to 555 billion euros ($671 billion) between the U.S. and EU, according to statistics published by Eurostat. The data, which comes before the implementation of the new EU-China Comprehensive Agreement on Investment (CAI), shows that China and the EU will be indispensable partners in leading the global economic recovery in the wake of the COVID-19 pandemic.

China's importance to the world economic recovery cannot be understated. As the only major economy in the world that saw positive GDP growth in 2020, China is forging ahead into the future and becoming an even more attractive destination for foreign direct investment (FDI). China's successful management of its coronavirus outbreak and how this translates to overall market stability is reflected in the fact that it was the largest recipient of FDI in 2020.

But an interconnected global economy requires partnership to prevail. Between the EU and China, not only was the trade volume likely increased by medical supplies going from China to the EU, but also an uptick in consumer spending on European goods in China. This is a give and take that everyone would like to see continue and the new CAI will ensure that this trajectory continues.

Not only is China poised to become the world's largest economy by the end of this decade, but, just a few weeks ago, analysts from Morgan Stanley predicted that China's consumer spending would double by 2030 to approximately $12.7 trillion, which is about what American consumers spend right now.

On this front, China is already leading the way in innovation. For example, China's e-commerce sector, which has boomed all over the world during the COVID-19 pandemic, is already larger than America and Europe's combined. Major Western companies including Facebook and Walmart have already begun to lift some features from Chinese e-commerce since the pandemic began to boost their businesses.

Along with this, the Chinese e-commerce industry faces some of the most pristine pro-competition regulations on the books. Products from all over the world can easily find a home in the Chinese consumer ecosystem as monopolies are kept in check. 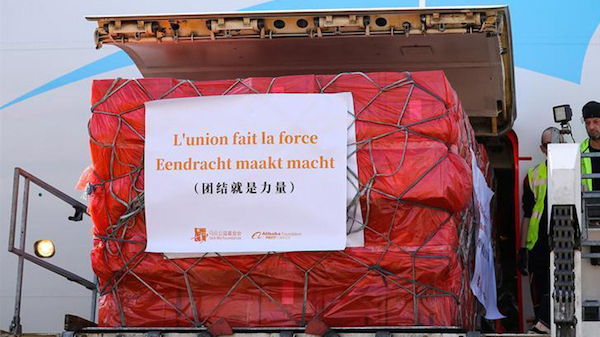 China-donated medical equipment with a banner on its package reading "Unity Is Strength" written in French, Dutch and Chinese is seen arriving at Liege Airport, Belgium, March 16, 2020. /Xinhua

The U.S., meanwhile, is falling behind largely because its deep contradictions are being exposed. The country's economy contracted 3.5 percent in 2020, which is the largest GDP decrease since the World War II, and every sector besides government and housing took a hit. Millions of Americans are still jobless and facing possible eviction, food insecurity or at risk of slipping into deep poverty.

If this wasn't bad enough, the U.S. is barely a month out from the most upsetting scandal in recent memory when a violent mob incited by former President Donald Trump stormed the U.S. Capitol on January 6. This horrified the world and exposed the deep cracks in America's political system.

It's not difficult to see why foreign businesses would not hedge their bets on investing in America or on attracting new American consumers, many of whom are struggling to pay bills. FDI to the U.S. has also been steadily decreasing since the 2008 financial crash, but fell off a cliff in 2020 as international investors lose faith in the country to provide stability.

At the same time, monopolies in the country are so concentrated that the entry costs for doing business are almost insurmountable to begin with across many sectors. Even if an innovative company were to prove itself to be a competitor, it could face unwarranted anti-competitive attacks from the federal government – which was demonstrated by executive action taken by former President Trump against Chinese companies like ByteDance, Tencent and others.

With all of this in mind, it's no wonder that China was the EU's largest trading partner last year and probably will be into the future. China's growing consumer market will provide unprecedented opportunities for foreign companies, especially for the EU, as the world pulls itself out of a global recession.

Stability followed by innovation, the political will to regulate and a growing Chinese consumer base are all reasons for this natural economic partnership to flourish.