"All parts of society" have been called on to "play their part in reinforcing the UK's economic and strategic strengths in cyberspace" in the government's new National Cyber Strategy.

There have been several major cyber security incidents since the publication of the last strategy in 2016, including the North Korean ransomware which

the year after, and the new one sets out how the UK can prevent similar attacks through to 2025.

Image:North Korea was blamed for the WannaCry ransomware attack which hit the NHS

The National Cyber Strategy says the UK will support the industries and the technologies which are vital to developing cyber power as well as use diplomacy to advance the country's geopolitical influence by shaping international standards, and increasing British exports.

It says the UK is "especially exposed" to the challenges of cyberspace, but as "one of the world's most digitally advanced nations... also uniquely well-placed to lead the way in seizing its opportunities for our citizens and for the common benefit of humanity".

The 130-page document is published as the government announces several schemes to develop the UK's domestic cyber security industry and workforce, including programmes for schools and for adults.

These include funding to support 107 businesses, the majority of which are based outside of London and the South East, 45% of which are led by women and 52% by founders from black and minority ethnic groups. 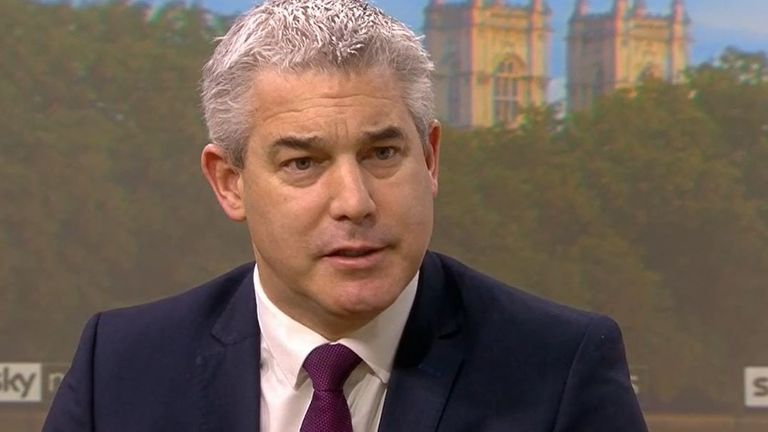 Image:Steve Barclay said the strategy 'transforms how the UK will advance its national interests'

"Being able to harness and nurture the skills and talents of the whole population is critical for our national security," it adds.

Steve Barclay, the Chancellor of the Duchy of Lancaster, said: "The new National Cyber Strategy transforms how the UK will advance its national interests in cyberspace and is a major milestone following the publication of the Integrated Review earlier this year.

"It sets out a clear vision for building cyber expertise in all parts of the country, strengthening our offensive and defensive capabilities and ensuring the whole of society plays its part in the UK's cyber future."