Recently, the Asia-Pacific Daily conducted an exclusive interview with Alexei Maslov, a Valdai Club expert and Acting Director General of the Far East Institute of the Russian Academy of Sciences. He talked about the implementation of the "Belt and Road" Initiative and the cooperation between China and Russia under the initiative. Also talked about are the development of the Guangdong-Hong Kong-Macao Greater Bay Area under the initiative, and the significance of the RCEP signing and other topics.

Maslov believes that the current "Belt and Road" Initiative has extended off the limits of a single initiative and has become a new form of "re-globalization", which is promoted by China and includes not only trade and transportation, but also the creation of new methods, new tools and new technical standards which deal with international trade, infrastructure, data exchange and storage, banking-financial activities, etc.. This can help various countries lift the stagnation that has been to a certain extent since the 1990s. Thus many countries need this initiative. Meanwhile, they do not want changes of the incumbent international trade organizing and other systems, but just hope enliven some regional and domestic projects. China has assumed the role of stimulants: on the one hand, the initiative helps solve its own domestic problems, one the other, every country in the entire world could enjoy the opportunity of taking part of the initiative. 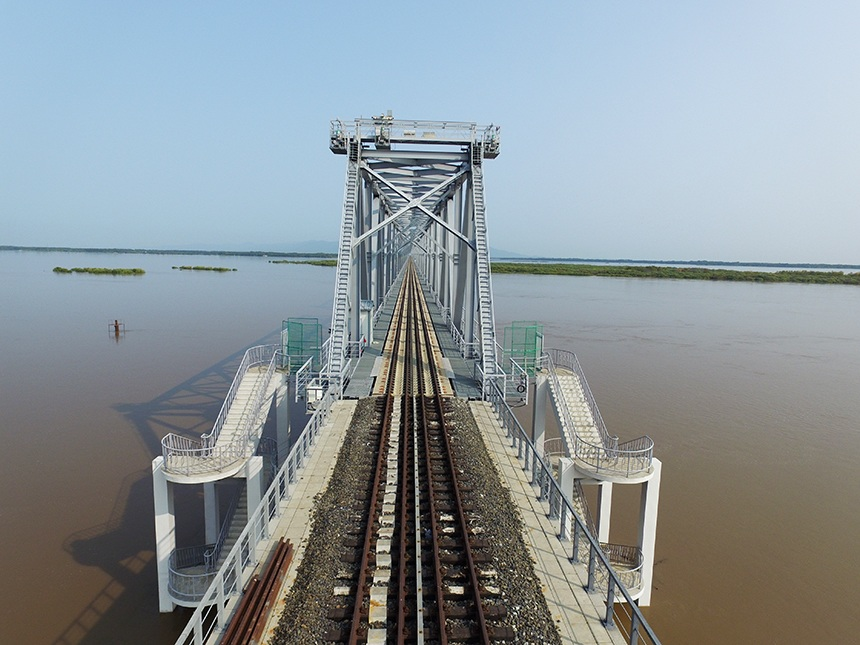 Maslov said that there were a string of skeptical voices claiming that China may put down some projects under the influence of the pandemic. Although some projects in Europe and Southeast Asia has left behind schedule due to pandemic prevention measures, China has not put off her commitments due to the pandemic.

The pandemic and the consequent deterioration in economic conditions in 2020 make some countries in Eastern Europe and Asia press on China for economic aid to them while two major Chinese banks, the China Development Bank and the Export-Import Bank of China, have reduced their loan issuance. Maslov explained that this is partly because the initial funds for a large amount of infrastructure construction have been allocated and the construction is nearing completion. In addition, China’s selection of investment options is now stricter, and the total amount has shrunk to less than US$50 million. China hopes to focus its funds on a small number of program packages and joint-venture investments.

Maslov introduced that in the cooperation between China and Russia under the "Belt and Road" Initiative, great results have been achieved in terms of facility connectivity. The most representative project is the reconstruction and upgrade of the Trans-Siberian Railway. But at least two problems must be solved: cargoes should be carried in two directions instead of only imported from China; the container transportation fee on Russian territory should be reduced or the transit route should be relocated to Northwest China. Good thing that now some part of the infrastructure has been built. Previously, the Heihe-Blagoveshchensk bridge across the Heilongjiang (Amur River) has been completed, and the Tongjiang-Sino-Russian Heilongjiang Railway Bridge (connecting the Tongjiang City in China's Heilongjiang Province with the Nizhneleninskoye City in Russia) will also be put into operation this year.

Maslov said that this channel will significantly increase the volume of raw materials and energy trade between Russia and China, and iron ore may become the main export product on this route. This railway bridge is expected to become an international transportation line with an annual volume of more than 25 million tons of goods and 1.5 million people. The operation of this bridge will shorten the railway distance between Beijing and Moscow by 809 kilometers. In areas involved, supporting industrial parks and special economic zones are being built.

Maslov also mentioned the Heihe-Blagoveshchensk cable-way across the Heilongjiang (Amur River). The cable-way has been undergone construction. It is a double-line, double-loading, single-traction, reciprocating overhead cable-way for passenger. It uses 80-person hoisting boxes with a running speed of 7 meters per second. The cable-way has a length of 973 meters, and a designed transport capacity of 6 million people annually.

In addition, the reconstruction project of the Baikal-Amur railway is in progress, and some localized factories manufacturing Chinese products in central Russia have also been built. But Maslov said that these developments are largely regional projects, and the full potential of infrastructure construction has not yet been tapped. For example, as of now there is no arterial transit road between China and Russia, while the Russian side hopes to build an array of integrated projects, docking systems from both countries in a long-shot perspective of the vast Eurasian landmass.

In addition to continuing cooperation in the field of facility connectivity, Maslov pointed out that both countries could cooperate in the high-tech field and build some joint projects, rather than do simple energy transfer. For instance, science and technology parks, economic development zones, and joint ventures can be built in China or Russia. Many products, from photo-electronic products to green foods, can be jointly developed and produced. They can be shipped to a third country. "Smart cities"can be jointly developed, for China has such know-how, which can be used not only in the Far East, but also in cities like Kaliningrad. In the fields of medicine and electronic production, some innovative and green enterprises can be established in Russia.

Maslov said that Sino-Russian cooperation should not be limited to road construction. Russia is now take great pains in developing innovative industries by giving certain tax incentives. These areas also urgently need investment. However, Maslov mentioned that the regional transportation links between Russia and Northwest China can continue to be strengthened. The Khorgos Port in Xinjiang is a good example. This port grows many new transportation routes and become the largest land port and an important trading hub in the western part of China. Russia is also interested in associating with similar projects, boosting domestic product exports.

Maslov said that thanks to China’s “Belt and Road” Initiative, new infrastructure and port construction have increased exports from some small countries, activated e-commerce, and simplified the settlement procedure. This initiative has greatly increased trade between participant countries, and this does not only refer to exports from China. According to the calculation of the World Bank for 135 countries, the average export growth rate from 2016 to 2019 reached 28.8%. For some countries, this figure could be 30-40%. For example, Vietnam increased by 46%. Due to lower labor prices, some Chinese factories move to Vietnam.

Owing to the initiative, China has successfully established a new infrastructure system at the regional level, which has helped many Southeast Asian and Central Asian countries, and even Eastern and Central European countries. These projects push the upgrading of the local manufacturing and service industries, and run a full range of functions from production of building materials to training of talents. At the global level, China has been able to not only establish a a limited economic realm within its own country, but also exceed the limit of neighboring countries, reaching Latin America and even Africa.

Speaking of the development of the Guangdong-Hong Kong-Macao Greater Bay Area, Maslov said that the location of the Greater Bay Area is not incidental. These three places are tightly connected and the division of labor between the three places has come into being for a long time: Guangdong is the technological innovation base, Hong Kong is the financial and education center, and Zhuhai and Macau are the tourism centers. In order to better build the Greater Bay Area, this area with a population of more than 70 million and more than 56,000 square kilometers needs to be deeply integrated and become an exemplar of the development of new technologies and production methods. Before 2035, this region could be expected to be world-class competitive. The governments in this region are committed to optimizing labor resources, commodity flows, and attracting funds for the region. The throughput capacity of the ports in the region will pose a challenge to all major ports in Southeast Asia, including Singapore. Generally speaking, China has built Hong Kong and Macau cluster economies, deeply integrated them, introduced a unified system, and expanded the scope of activities of this region in the entire Southeast Asian region. The Greater Bay Area will play a key role in the new economic system of Southeast Asia.

Maslov said that the development of the Greater Bay Area is also very beneficial to Russia. First of all, this region has been developing a free trade zone since 2014. Russia is actively using this trade zone to export products to Southeast Asian countries. It may also expand cargo transshipment between this region and the Free Port of Vladivostok. Shenzhen’s Qianhai-Shekou District is also very promising. Its four leading fields (finance, modern logistics, information services and technical services) account for 84% of the total output value. This is very attractive for Russian companies which have intention to land in this region, especially considering that this region is implementing 22 pilot projects to optimize business activities in the fields of finance, taxation, law, labor resources, education, healthcare, and communications. In Hengqin, Zhuhai, there are obvious advantages in technological innovation, medical care, and tourism. In Dongguan, there are many multinational universities and R&D centers with a total of more than 20,000 related staff, which is also very attractive to Russia.

RCEP is a New Stage in the Development of Asian Integration

The signing of the Regional Comprehensive Economic Partnership Agreement (RCEP) is a new phase in the development of Asia’s integration. This is the world’s largest free trade agreement. The signatories account for 29% of the world’s GDP, the population accounts for about 30% of the world, and about 1 billion people meet the consumption standards of the middle class. This is a huge interconnected market. More than 92% of the commodities in the framework will be lifted of taxing within the next 20 years, which will mutually increase the market share of participating countries. No less than 65% of the service market will be completely open to foreign investment, which will also attract more foreign investment.

In addition, there are advantages such as simplified electronic trade procedure and protected private property, which will activate the economic life of the region. China believes that the implementation of this agreement will simplify trade and investment procedures within the framework of the “Belt and Road” Initiative, and will thus successfully manage some domains of the regional economy. At present, the total trade volume between China and the participating countries has reached one third of China's total foreign trade volume.

In 2020, China’s total exports to the countries participating in the agreement summed up to approximately US$700 billion, accounting for 27% of China’s total exports. But China is not only interested in promoting exports. China also hopes to import more cheap advanced technologies, consumer goods, medicines, medical equipment and manufacturing services. China’s total imports from the signatories of the agreement reached US$778 billion in 2020, accounting for 37.8% of all imports. About 10% of foreign investment comes from signatory countries, and this percentage will continue to grow.