The US and its allies have initiated efforts to destabilize Afghan peace. Today’s blasts at Kabul airports are linked with US-backed ISIS. The US created ISIS and Daesh to fight against the Syrian legitimate government. The US provided them training, weapons, and dollars to destabilize the Syrian Government. Then they brought them to Afghanistan to fight against the Taliban. Few European countries are also active in Afghanistan to fail the Taliban. G-7 has also used coercive decisions to punish the Taliban and isolate them economically.

The US has frozen the Afghan Banks assets worth US Dollars 9 billion. The newly established Taliban Government may face difficulty paying the salaries of Government employees at the end of the month. The US and its allies are planning to create unrest in Afghanistan.

It is worth mentioning that Afghanistan is located at a very strategic location, ancient Silk route, connecting East Asia, South Asia, Central Asia, China, Russia, Eurasia, with, through Gwadar (Pakistan) to onward destinations in Africa, Europe, and the Middle East. The instability and war in Afghanistan was a major hurdle in the development of the whole region. All neighboring countries and China, Russia were the victim of the situation in Afghanistan. 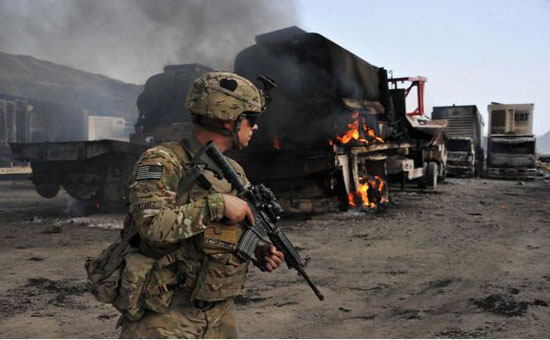 A peaceful Afghanistan is a prerequisite for the peace and development of the whole region. It is the responsibility of all neighboring countries and regional countries to support peace in Afghanistan. Taliban has defeated the US and recaptured Afghanistan. But they are facing several challenges like recognition by the International community, economic challenges, reconstruction, and rebuilding of the war-torn country. Afghanistan was in a state of war for almost four decades. Either USSR or internal factions, or the US, all have damaged the infrastructure, power plants, industry, etc. Today, Afghanistan lacking hospitals, schools, public facilities, and social life.

It is time for the International community to extend helping hands to reconstruct Afghanistan. As the neighboring and regional countries are beneficiaries of peace in Afghanistan, so, they should proactively play their role in bringing stability to Afghanistan. They should recognize Taliban rule immediately, should extend humanitarian assistance, supply of food, medicines, and items of daily use on priority, also economic and financial assistance, etc. The most important is diplomatic and political support. The first step should be recognition of the Taliban’s potential and positive role in bringing peace to Afghanistan. Their gentle and peaceful behavior, while re-capturing Kabul must be appreciated. The recapture of Kabul was so smooth that it leaves behind the transition of presidential powers in Washington.

Taliban as an organization was put on the terrorist list by the UNSC on the lobbying of the US and its allies, The first thing that is required on an urgent basis is to remove the Taliban from the terrorist list of the UN. Regional countries should play their proactive role in this direction. China and Russia are the major power in this region and should contribute more. It is desired that China and Russia may lead to remove the Taliban from the terrorist list and recognize them as the legitimate government of Afghanistan. China under BRI, may vital role in the reconstruction of war-torn countries.

If regional countries are waiting for others to take the first step (wait and see policy), the US and its allies may spoil whatsoever have achieved on grounds by the Taliban. It is expected if China and Russia lead, many countries around the globe are willing to recognize Taliban rule and extend helping hands. It is guessed that there are more than a hundred countries willing to contact Taiban and willing to work with them closely.

Taliban are matured and reformed already and have been behaving wisely. They have already announced that they wanted good relations with all nations and especially with the regional countries. Taliban has assured that their country will be not used against any third country.

After fighting for four decades, they have learned bitter lessons and reformed themselves. The improved Taliban are very gentle, kind, and smart, it was revealed while they were recapturing Kabul, without any bloodshed.

A peaceful, stable Afghanistan will help the whole region toward the development and eradication of poverty. Collectively, we may rebuild this world a better place to live, for our self as well as for next generations to come.