China's "dual circulation" policy of making domestic consumption the driver of economic growth while promoting closer relations with other countries in enhancing and sustaining long-term growth makes a lot of sense. Exploiting the potential purchasing power of its increasingly huge domestic market of 1.4 billion souls could guarantee sustainable long-term growth. Earmarking massive funds for technology research and development would lead to high-end manufacturing and self-sufficiency in advanced chips production. Expanding the trade and investment through the Belt and Road Initiative (BRI) would further diversify economic relations, allowing China to wean away from the U.S.-controlled West and Japan.

The "dual circulation" strategy was first announced in May and became policy amid increasingly devastating trade, technology and geopolitical wars between the U.S. and China. To circumvent U.S. sanctions and dealing with possible decoupling, the policy was to rely on "internal circulation," making domestic production, distribution and consumption as the engine of economic growth.

Key to the "internal circulation" was innovative manufacturing and increased private consumption. The former was to be realized through a massive spending of 1.4 trillion U.S. dollars over the next five years on innovation to climb the manufacturing value chain and become self-sufficient in advanced semiconductors and other technologies. The latter was to be attained by boosting household income through urbanization, turning migrant workers into city dwellers and enlarging the around 500 million middle-class population.

The "internal circulation" was to be supported by "external circulation," opening up the economy wider to attract more foreign investment in high-end manufacturing, strengthening the supply chain and deterring countries luring businesses away from China.

The "dual circulation," likely be incorporated into China's 14th Five-Year Plan effective 2021 to 2025, not only makes sense but is deliverable. Private consumption, for example, is less than 40 percent of GDP as compared to the around 70 percent in Western economies, and it thus has significant room for expansion. Moreover, Chinese households have huge savings, estimated at around 25 percent of disposable income and low consumer debts. With the right incentive policies such as lower tax rates or increase investment, the 1.4 billion consumers could open their wallets (that's a lot of wallets) wider, culminating in enhancing and sustaining economic growth.

Getting more people to become city dwellers would undoubtedly increase private consumption because they will no longer be able to grow their own food, make clothing or basic household utensils as rural residents normally do. Besides, building towns and small cities is itself regional economic development, requiring new investments in construction, appliance manufacturing, transportation, hospitality, and other tertiary industries. As business and employment prospects rise, household income would similarly increase, leading to the expansion of the middle class. 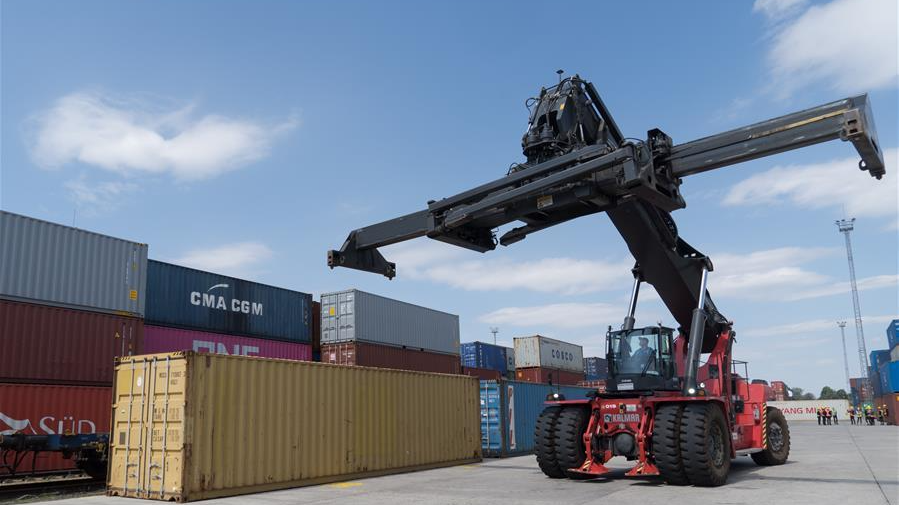 A worker prepares to unload cargo containers from the China-Europe freight train at the BILK logistics centre in Budapest, Hungary, April 27, 2020. /Xinhua

With 1.4 trillion U.S. dollars earmarked for innovation, China could well become self-sufficient in developing and producing high-end semiconductors and other high-tech products. That kind of money would be able to attract the world's best and brightest scientific minds as well as employing most of the millions of STEM graduates entering the labor force each year. Of that large number, a few would bound to be creative or outstanding, thus increasing the quantity and quality of research and development.

On the "external circulation", foreign markets supporting China's development already existed and will likely become greater. The BRI continued to expand in spite of Covid-19 and U.S. badmouthing. According to Chinese government statistics, China signed 200 agreements covering a wide range of areas – infrastructure investment, culture, others – with 138 countries and 30 international organizations. Other nations, including staunch U.S. allies are jumping onto the bandwagon because of the BRI's obvious economic and geopolitical benefits.

Indeed, two-way trade and investment between China and the participating countries in the BRI reached over 1.9 trillion U.S. dollars and 35 billion U.S. dollars respectively in 2019. Those numbers are set to grow because more countries are expected to come onboard since China is the only country that showed positive growth in 2020. Despite U.S. badmouthing, countries do understand that cooperating with China serves their national interests.

Many U.S. enterprises recognize the benefits of doing business with China, it is therefore no surprise that Trump's efforts to lure them away from China failed miserably. The American-China Chamber of Commerce in China found that over 90 percent of U.S. businesses are staying put or increase investment in China. Of the four percent largely labor-intensive manufacturing businesses deciding to leave the country, one of the primary motives was unable to find enough workers.

Leaving China not only reduces competitiveness, but also losing a large profitable market. Because of the country's comprehensive and efficient infrastructure system and supply chain, few if any country, including the U.S., can match China in terms of cost and efficiency in producing a good. And, of course, the country's 1.4 billion consumers with the purchasing power to match are difficult for any business to ignore.

Indeed, Trump might have found out that discarding U.S. technology firms' biggest customer is not a good idea. Blacklisting Chinese firms and barring those in U.S. from selling technology products are already taking a toll on companies like Qualcomm and risk losing American innovation supremacy.

The "dual circulation" strategy would make the British economist John Maynard Keynes proud, taking a communist country to appreciate and understand the value of his theory.

Italian designer Cucinelli gives $38m of clothing to those in need Sep 14,2020