The revoking of CGTN's license by Ofcom is politically motivated

Editor's note:Keith Lamb is a University of Oxford graduate with an MSc degree in Contemporary Chinese Studies. His primary research interests are China's international relations and "socialism with Chinese characteristics." The article reflects the author's opinions and not necessarily the views of CGTN.

The British media regulator Ofcom has just revoked CGTN's license to broadcast in the UK. Initially, the reason given was due to the owner of the license, Star China Media Limited (SCML), not having editorial responsibility. However, the request to transfer the license to CGTN itself was also refused as Ofcom stated that CGTN was ultimately controlled by the Chinese Communist Party (CPC).

Ironically, Ofcom which is an abbreviation for The Office of Communications, is directly accountable to Parliament. That is to say by the same logic it is controlled by the British government. The same is true with the British state broadcaster the BBC which is funded out of UK taxpayers' money.

With British media outlets, it isn't just a structural relationship with the government that controls news output. The British government also enforces direct command over the media through Defense and Security Media Advisory Notices. Commonly known as D-notices, they impose media blackouts over restricted content that is considered sensitive by the government.

The point is that in a world of sovereign states, no media can be completely disconnected from the political system of the state. The Ofcom revoking of CGTN's license, which is fundamentally politically motivated, is of course a paradoxical example of this truth.

Those with different cultural and historical backgrounds will view the world from different angles. One man's truth is another's untoward bias. The question then comes down to which truths are credible and whose truths are allowed.

When it comes to objectivity, I personally believe that absolute objectivity is impossible to achieve. In our human state, we are unable to transcend time and space. As such, those who disseminate their content under the banner of absolute objectivity are the ultimate propagandists. Under their "god-like guise," they lose their sense of humanity and their viewpoint becomes adrift in fantasy.

Acknowledging that we all are constrained in the material world, absolute objectivity and fairness is something to be strived for though impossible to achieve. CGTN does its best to give its objective and fair angle on news events from its own position. Just because its views do not mirror that of the Western media chorus is something to be applauded and not degenerated. This is because only through the reflection from the other are we able to see the inherent flaws in ourselves.

However, CGTN presents more than just the Chinese side of the story. It is too often engaged in countering propaganda, distortions and lies produced by collusion between the triad of Western government, media, and the NGO complex.

The fabricated claims of genocide and slave labor in Xinjiang produced by the Washington-funded National Endowment for Democracy (NED) and the Australian Strategic Policy Institute (ASPI) which is funded by the military-industrial-complex are a prominent example of this.

Indeed, these distortions represent persistent attempts of Western elites to undermine China's political-economic system. This is something CGTN certainly does not do against Western systems. 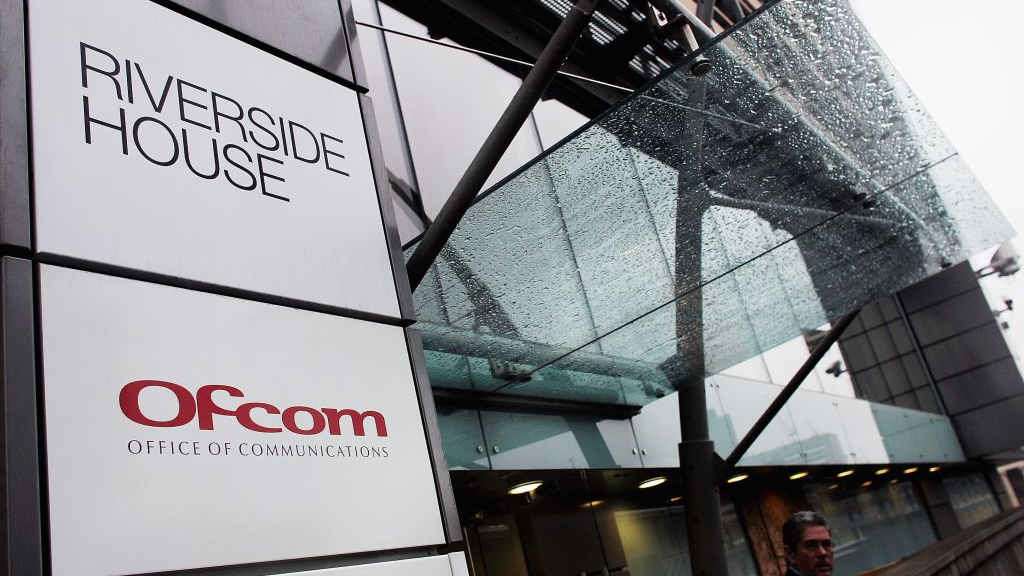 The Ofcom (Office of Communication) logo on the front of its headquarters in London, England, January 18, 2007. /Getty

Most Westerners will not question the aforementioned examples and no doubt the tale of genocide and slave labor will be so ingrained that questioning it will be considered a cardinal sin.

However, remember that such state-media collusion is in fact common. Atrocity propaganda lies justified both Gulf Wars and continues to justify Western imperialism to this day. For most this propaganda isn't obvious and that is because the best propaganda is so ubiquitous it becomes the truth.

When it comes to China there is a near British media blackout of any positive reporting about the country which serves as the foundation for anti-China atrocity propaganda. This also serves as the source of a multitude of ignorant comments about China that arises from Western citizens.

Who else but CGTN will report the miracle of China's transformation? China's mass poverty alleviation, its infrastructure development, and its joint cooperation with the Global South through the Belt and Road Initiative are some of the most positive developments for the whole of humanity. However, they barely get reported in the British press and if they are, a negative spin is taken.

Consequently, the revoking of the CGTN license will enable the British government and press to continue merrily along in their dream of self-imposed "objectivity" without considering the needs, wants, and aspirations of the developing world that China is part of.

Ofcom's revoking of CGTN's license is a larger attack on China in general. Under these rules of engagement, even positive news about China by on the ground witnesses is politicized. This was demonstrated by the recent article in the Murdoch-owned British newspaper, The Times, that demonized the British YouTubers "Barrett" and "Jason Lightfoot." Their crime was to report positively on their lived experience in China. Even those taking part in a sponsored tourist event in Xi'an were castigated as CPC stooges.

Iran threatens to end deal with IAEA over U.S.-led push to criticize it Feb 06,2021