What challenges does the U.S. face after the presidential election?

I am starting to feel some sentimentality, or even sorrow, about the end of the reign of Donald Trump. Now that he's on the way out, the world will have to face complex, confounding problems like mitigating climate change and environmental destruction.

Like many people, I found Trump's presidency to be mentally and emotionally consuming.

In the early years, I used to wake up in the middle of the night and check my phone, hoping for news that augured his impeachment. With each arrest and conviction of a member of Trump's inner circle, I grew more convinced that his resignation or removal from office was closer.

The U.S. is still full of Trump supporters. But living overseas, I have never met one, or at least anyone who admitted to it. In the overseas community of relatively educated, cosmopolitan people, to admit to being a Trump supporter could only mean two things.

You are a sheep: gullible and liable to believe the most ridiculous claims; or you are a wolf: happy to see the stock market and your retirement savings rise at the expense of environmental protection, social justice and America's standing in the world; satisfied to see people different from you suffer to preserve your privilege; and willing to exploit the prejudices and superstitions of the sheep for your advantage.

No one wants to admit this, at least no one I have met. I suspect as time goes on, it will become increasingly difficult to find people who admit to having voted for Trump.

As a columnist, Trump has been a profound gift. He spared me from having to ask difficult questions about the world, and where it was going. I did not need to self-reflect. There was no need to read books, talk to experts or search for fresh, interesting stories that could uplift people or cause righteous indignation.

Trump took care of all that, providing an endless stream of topics. The scandals and outrages came on so thick and fast that sometimes I would sit down to write but be too stunned and dizzy to know where to start. A single week could provide more broken norms than a year or even a whole term of other presidents. 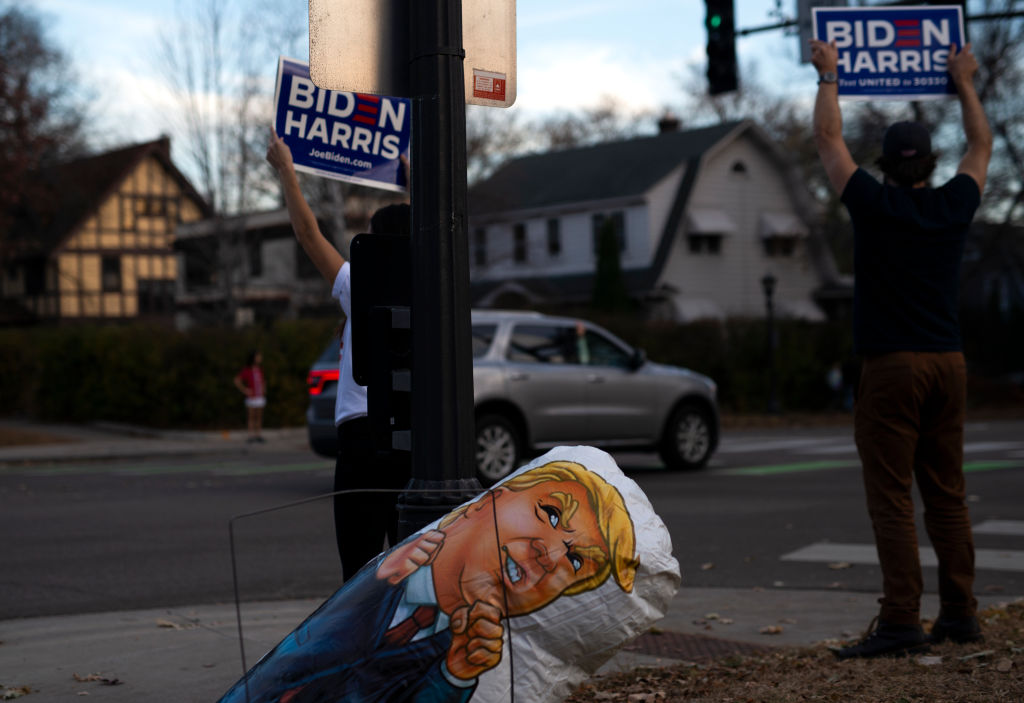 A punching bag printed with an image of President Donald Trump lies on the ground as people celebrate the news of Democratic presidential candidate Joe Biden's victory in the presidential election in St. Paul, Minnesota, November 7, 2020. /Getty Images

Sometimes I wondered if this state of constant agitation was what it was like for Republicans during the Barack Obama years. Did Obama's face, voice, and actions provoke the same kind of visceral distaste for them that Trump has done for me? Will they feel the same way under Joe Biden and Kamala Harris? I know the answer is yes.

In the same way, the mainstream media has offered daily negative reports on Trump, the Fox News universe served up the same about Obama and his secretary of state Hillary Clinton for eight years, and will do so again.

With the hindsight of four years of Trump's racism, I think people hated Obama because he was Black, and because he wanted to take things away from them to give to other people. To them, that's socialism.

For a while, I decided that I could not engage with Trump or his negativity any longer and that I would not write about him. Instead, I wrote profiles about interesting people I admired or about people successfully dealing with the adversity.

But I soon lapsed and fell back into writing about Trump, because it seemed so urgent, and it was so easy.

Trump will soon be a bad memory, but the problems he distracted us from are still here, more pressing than ever. My biggest concern is environmental degradation leading to mass extinction, including possibly our own.

Watching the coronavirus pandemic slowly spread filled me with despair, because this has been a miniature version of the environmental disaster that is also unfolding around us, more slowly but just as relentlessly.

Like COVID-19, many Americans are in denial about climate change, despite what scientists tell us, and what is in plain view. COVID-19 showed me that the United States and the West in general don't have the tools to control a crisis like a pandemic, or environmental challenges.

One reason for their botched response to COVID-19 is that as societies they simply not set up to marshal people for a common cause. To take a simple example, contact tracing largely failed in the U.S. because people invoked their privacy rights and would not cooperate with health officials. Some people believe wearing a mask infringes on their freedom.

China had the tools to close off Wuhan and make sure the city's entire population was tested. The United States and Europe apparently don't have the mechanisms to take such measures.

In a similar way, I am afraid the West, and in particular the U.S., simply don't have the power to control carbon emissions or stop industries from destroying our environment. Industrial interests simply wield too much power. This frightens me, because unlike the pandemic, there will be no vaccine or technological fix for irreversible environmental damage. There can only be mitigation of its worst effects.

And as the oceans rise and the plastic particulate count in our blood increases, fires rage and fresh water reserves vanish, the outrages brought by Trump will seem like trifles, distracting us for four years and giving us something easy to think about in place of the complex problems we all face.

Tackling environmental destruction and climate change will require bold changes, from the level of personal behavior to the system of our global governance. Judging by the international response to COVID-19, the West is not up to the task. Hopefully, we can learn from our mistakes.